If you want to make your Child’s next Birthday Party a memorable event, then a Magic Show by Magic RAJ is the answer! Not only will Magic RAJ perform hilarious Magic that is suitable for all ages, the Children will also have the opportunity to take part in Magic Show!

The Birthday Child always becomes the star of the show as they help Magic RAJ and performs amazing feats of magic themselves!

Our Birthday Party Magic Show is 45 minutes of entertainment including a variety of Comedy Magic (What a great Photo opportunity!)

If you want Magic RAJ to teach some Magic tricks for the kids after the show, this service is available for a small extra charge.

Need a show after school or on a week day, not a problem!

Did you find us at the LAST MINUTE? Contact us! We are happy to accommodate last minute Birthday Party bookings whenever possible. Call 416-705-1904 from Toronto or visit magicianraj*com 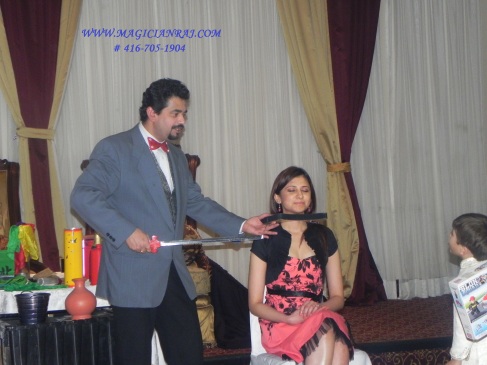 PROFESSIONAL MAGICIAN RAJ – Where the FUN begins! Entertaining Children & Adults for over 24 years.

His own happiness comes from the ‘bridge of oneness’ he builds with his spectators. “Big smiles, Amazed looks. That’s no illusion, simply wonderful magic”